Following on from An Evening with Rick Stein, the next day was about to get even more amazing! I (we) get to watch Rick Stein cook for us in his kitchen! Are you for real! He’s not on TV but standing right in front of me cooking 3 delicious seafood dishes, which we then get to taste. I just can’t believe that this is actually happening, that this day has finally arrived, that I will be watching a food icon share his recipes and tricks with us!

I was having hot sweats and I couldn’t think straight or smile, that’s how nervous I was. I felt like I was on my first date with my husband! All I could think about was ‘we’re actually going to be sitting in Rick Stein’s dining room, having a glass of champagne, watching him cook and then tasting his dishes!’ OK, it wasn’t just me and my husband alone with Rick, we had some 23 Bannister’s guests there too! My husband kept telling me to smile while I was taking photos of Rick cooking but I was too heavy in thought and concentration to smile. After the champagne kicked in, I started enjoying the moment and came to the realisation that this is a once in a lifetime opportunity to watch this great chef cook.

We took a small stroll to his house on the cliff top, which overlooks an amazing ocean view. We are greeted with a glass of champagne as walk in, where there’s a seat for everyone, facing Rick Stein’s clean, white kitchen. A TV screen hung above his kitchen so you could watch close-ups of everything Rick did. I was actually quite surprised that for a chef’s kitchen it quite compact, having everything within arm’s reach. The only thing missing though was a dishwasher!

Rick comes out in his purple gingham Ralph Polo shirt, puts an apron on and welcomes us all to his place. A cheers to start the day and he begins. He starts with skinning a huge piece of Atlantic salmon, in one go – I’m sure he’s practiced that many a time 😉 – and prepares his sliced salmon with a ponzu dressing and pink grapefruit. A-May-Zing!! I’ve never experienced anything like this before! Grapefruit and salmon and a Japanese ponzu dressing worked perfectly together! The salmon was so fresh, the pink grapefruit added a ‘zing’ of citrus to the tart seaweed, soy and mirin dressing – WOW!

TIP: Always keep the skin off the salmon as you can place it in the oven, crisp it up and serve it with sea salt as chips or serve it to add another texture to the dish. Works every time and people are generally amazed by something so simple!

TIP: The three knives you’ll ever need in your kitchen – a chef’s knife, a filleting knife and a paring knife, that’s it! You can do everything with these three knives. 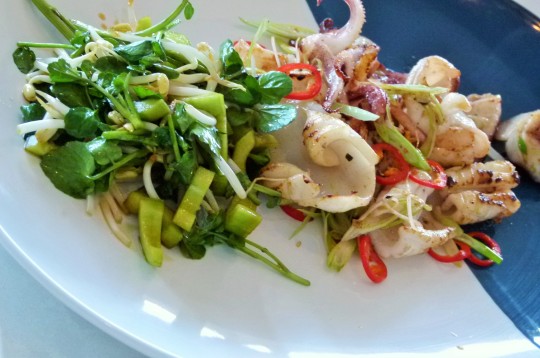 Next was Sichuan salt & pepper squid with red chilli and spring onions. Preparation for this dish was the longest part of the whole recipe – roasting the spices, slicing the squid, preparing the side salad. In five minutes, the squid was ready and plated nothing to it. OMG! The squid just melted in your mouth! Absolutely delicious!

TIP: Unless your fishmonger does it for you, remove the bone from the squid before cooking. I never realised squid had a bone, did you? You learn something new every day.

TIP: if you don’t have a mortar and pestle to grind your spices, use the end of your rolling pin to grind them. Worked perfectly for Rick – impressive!

TIP: Ensure your squid is brown in colour when you buy it, not pink/purple and it has no smell.

TIP: Keep the squid ink sack for future use, as this is quite expensive to buy and usually what you see in supermarket shelves, if you look closely at the label, is usually cuttlefish ink, as it’s easier to come by. Very interesting!

Guess what I did? I helped take the dishes to the sink at Rick Stein’s house! I’ve actually ventured into his kitchen and placed the plates in the sink, Rick Stein’s sink! How many people can say they’ve actually been in Rick Stein’s kitchen? I was just a little excited about that, being in a food legend’s kitchen.

Our last dish Rick cooked for us was grilled Barramundi with spring onion mash and soy butter sauce. His dishes are influenced heavily by Asian flavours, especially Japanese, a bit like Jacques Reymond. The flavours from these regions always compliment the dish, never take away from it. Using spring onions instead of chives was a new idea for me and something that I will be trying very soon as my husband adored that mash. Perfectly crispy skin with melt in your mouth Barramundi, life couldn’t get any better.

TIP: When cooking fillets of fish, ensure the middle of the fillet temperature is 55°C. When cooking a whole fish with bones, the core temperature should be 65°C – perfectly cooked fish every time.

A few questions were asked throughout the Masterclass and here’s a couple I remember:

What’s planned for the immediate future? 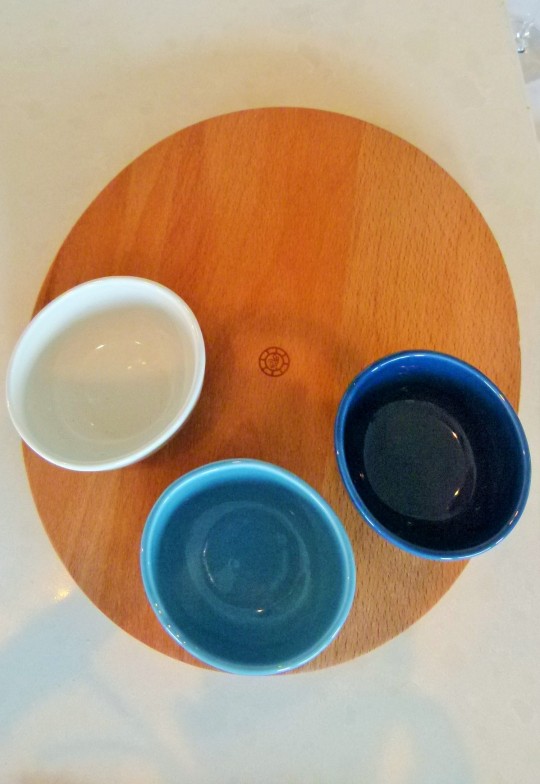 In the next couple of months, Rick has a new crockery, serving ware and cutting boards range heading to our Myer stores (how gorgeous do they look!) Something he feels very passionate about. His pieces reflect living by the beach, which the pieces and colours – blues, whites and Beechwood – compliment perfectly and would look great in any kitchen.

He’s also been working on a new book, which should be released sometime in the New Year, about his travels and experiences (recipes) from the Eastern Mediterranean, where he had just spent the last couple of months filming. So a new TV series too! Very exciting, can’t wait!

Would you rather cook or be cooked for?

‘I love cooking. I love entertaining and inviting people over to try my new recipes that I’ve been working on.’ He loves eating and serving what he loves to eat at home. He’s very proud that he serves ‘bigger’ portions of food to people rather than concentrating on garnishes, that’s quite popular at the moment.

The first memory he can remember is that of his mother cooking. She was the biggest influence and teacher – he never remembers learning ‘how to cook’ as such. . . Always learnt ‘the basics’ while watching his mum de-shell beans or pluck a chicken. . . Dinner always involved a main dish and dessert, with the occasional starter of soup.

To finish, we all got our cookbooks signed and were allowed to have a couple of minutes with Rick out on his patio.

I wanted to go last – apart from the fact it was cold outside & I didn’t want to wait in the cold – as I had a ‘special’ cookbook (from 1995 – heeheehee) that I wanted to show him. Above is what Rick wrote in my cookbook, which was different to what everyone else had written in their cookbooks! I don’t think I’ll be forgotten 😉

I walked out of Rick’s house in awe, amazed that seafood could be prepared so quickly & simply, with flavours being added to the seafood to compliment it. I just wanted to cook seafood straight away (which my husband & I did after we went to the Pyrmont Fish Markets in Sydney and cooked for my in-laws, but that’s another story.) I just wanted to put everything that I had learnt into practice. 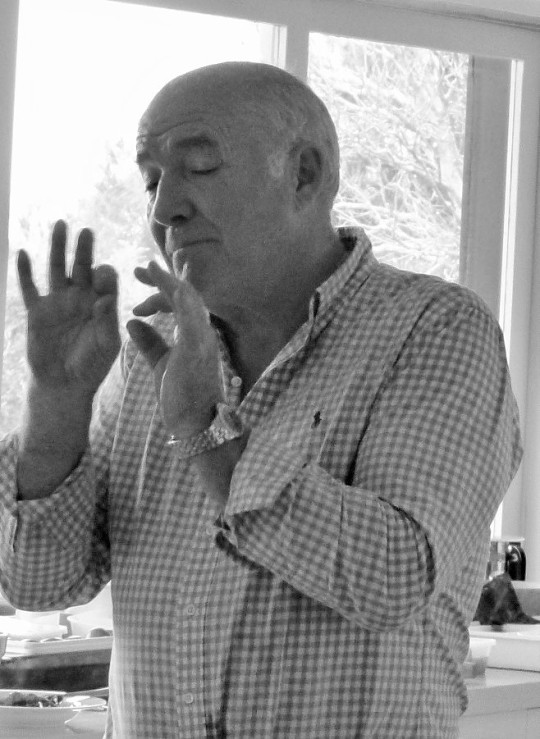 This was an absolutely amazing, once in a lifetime experience that I will never, ever forget. If you get a chance to be inspired by someone, whether it’s your favourite chef, singer or anyone, please grab the chance and do it now. Life is to be enjoyed as much as possible by doing the things that make us smile.

An extra special thanks to my husband for taking me on my wonderful amazing birthday present journey! 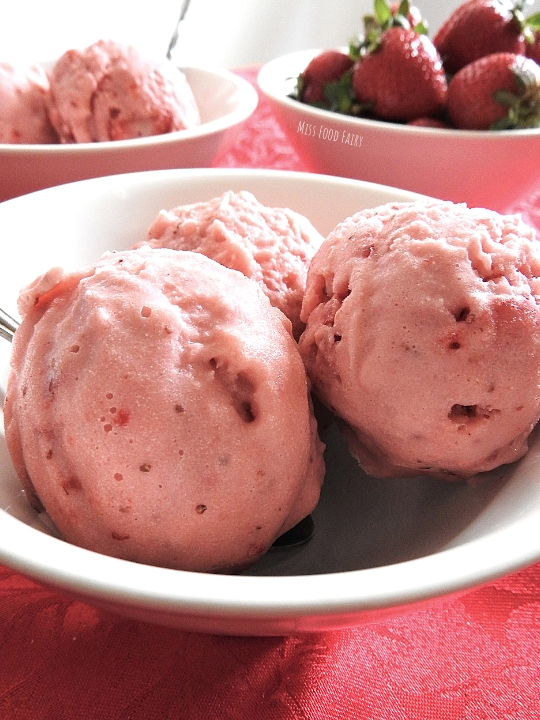